The Damas Island Estuary of Costa Rica contains thousands of acres of protected mangrove forests. Red, black, white, and green (or “pineapple”) mangrove trees co-exist, providing ecosystems that are critical in the survival of several different plant and animal species. Conveniently located a mere ten minutes from the city of Quepos and only fifteen minutes from Manuel Antonio where Cafe Milagro’s Restaurant is located, travelers often take kayak trips through the canals of the forest in search of Costa Rican wildlife.

Native to the tropics and subtropics, mangrove forests exist in estuaries, where saltwater and fresh water come together. This unique quality makes them an environmental asset unlike any other tree as they provide habitats for creatures of land, sea, and air. 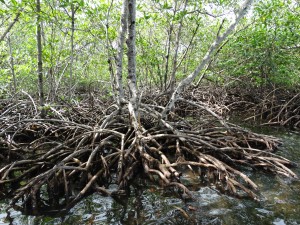 At the base of a mangrove trees is a massive root system that grows down through the water and spreads in various intertwining directions. When multiple trees combine together, it establishes a giant haven along the banks which constructs an entire infrastructure for countless species of fish, reptiles, and invertebrates. The protection that is provided by the entangled stems allows smaller fish and shrimp to mature, thus creating hunting grounds for their larger prey. This proves invaluable for the Costa Rican fishing industry. Bigger fish congregate at the foundation of the mangroves in search of food, therefore fisherman seek out the mangroves in search of the next big catch.

But the roots aren’t the only part of the mangrove where habitation prevails. The dense, leafy canopies provide housing for innumerable exotic bird species native to Costa Rica, while amongst the twisting branches slither the elongated form of various snakes. Capuchin monkeys can be seen playfully swinging from one mangrove to another while the lazy crawl of a sloth can go almost unnoticed. Even the endangered pygmy anteater, the smallest anteater in the world, makes its home within the mangroves full leaves.

These ecosystems are vital for the survival of many different species, and that includes humans. Mangroves provide global benefits to the environment with their massive production of oxygen. Due to their density, they take in substantial amounts of carbon dioxide from within the atmosphere, thus emitting equally substantial amounts of oxygen. The many values of the mangroves are why there are several protected forests across the world.

A visit to the Damas Island Estuary provides a unique opportunity to learn the intricate details of Costa Rica’s ecological and environmental resources. The vast array of wildlife hidden within those thick forest walls make journeying through those waters a true Costa Rican adventure.

Since 1994, Cafe Milagro has been working with small, independent growers to source the finest coffees Costa Rica has to offer.